When Someone Says The Music Is Too Loud

If your church plays modern, pop/rock style worship songs, you’ve likely heard this complaint: “The music is too loud”. For those of us who are musicians and tech team members, this can be frustrating feedback. You’ve put hours into preparing the service and the environment, and instead of focusing on the impact the service is having, you’re staring down what can feel like an endless stream of unnecessary and unfair criticism.

Don’t they get it? This is how this music is supposed to be experienced!

If you’re like me, your first instinct is to ignore the comment card, simply smile and nod during the conversation, and carry on, but if you receive these complaints regularly, there are some great reasons to engage with that feedback in a more thoughtful and active way. Let’s dive in!

Know your levels and keep it consistent.

The best thing you can be in conversations about volume is informed. If you’re going to fight for louder music, you should know how loud your worship services actually are. Are you consistently mixing to the same levels every week? Every sound booth should have a decibel reader, and no matter what volume you agree upon, keep it consistent week to week.

One common complaint is that the volume in the worship service can cause hearing damage. This is an easy critique to respond to if you know the actual dB levels in the room on a given week. OSHA has handy charts for safe levels of noise exposure. If you’re mixing at unsafe levels, turn it down. If you’re not, you’re prepared with an answer for those who think you are.

A church I previously worked at had a steady stream of volume complaints for years. At first, it was mostly chalked up to members struggling with changing music styles, and preferring the old way of doing things. While there was probably some truth to this – any church that has undergone a shift in music style can attest – there were other factors at play.

First of all, the sound engineers were all volunteers, with a wide disparity of skill and experience. The mix was inconsistent week to week. Even with strict decibel limits in place, the sound varied dramatically each Sunday.

Secondly, the PA system was old and not designed for a full rock band. The highs were harsh and the subwoofers lacked punch and clarity.

The fix in this situation was twofold. First, the entire sound system was replaced and upgraded. Second, the church hired a professional engineer to mix every week. After that, the craziest thing happened. We actually started mixing about 5 dB louder on average, but the volume complaints vanished almost entirely.

Now, I understand that these are both huge investments for a church (the sound system proposal took years to get approved), but it demonstrates an important truth. “Too loud” isn’t always about volume. Sometimes you just have a bad mix or a low-quality sound system that amplifies harsh frequencies and makes the music hard to listen to.

I recently led the music at service for a church that primarily plays high energy, rock-style worship music. This particular weekend, none of our volunteer drummers were available, so we chose to play an acoustic set with just acoustic guitar and piano to accompany the vocals.

After the service, I was greeted by a woman with tears in her eyes, who told me that this was the first time she had been able to sit with her family in the service in nearly two years. She had suffered a concussion, and now, two years later, still had trouble being in the room when the drums and bass were playing. The impact of the low frequencies triggered some pretty painful migraines as a result of her concussion.

I’ve spoken with many combat veterans who also struggle with the sound of drum sets, as it can trigger some PTSD symptoms. These are congregants who we rarely hear volume complaints from – they believe that their situation is not typical and have decided to make the best of the situation by stepping out into the lobby during worship – but acknowledging and making accommodations for them can mean the world.

Since that interaction with the woman recovering from a concussion, I’ve tried to schedule an acoustic or stripped back set at least every 6-8 weeks, if not more often.

There are just some church members who will always prefer the way things used to be. They may remember the piano and choir worship team fondly and wonder why things ever changed. Remember that these feelings and opinions are valid and acknowledge that – without being patronizing. Be direct in these conversations, don’t promise to “see what we can do” or “look into it”, if you have no intention of changing anything. Someone may not have the technical knowledge to articulate what they don’t like, but that doesn’t make them dumb. Explain as simply as possible the rationale for the way things are done, and be confident in your answer. Dancing around the issue with a convoluted response usually just feels dismissive.

Here’s something you probably didn’t come here to hear. Your music might actually be too loud. For many sound engineers and musicians, the default question is often “how loud can I get away with mixing this?”
You’re asking the wrong question.

Instead, ask yourself “what’s the lowest level at which I can build an effective mix”. If you’re constantly mixing at the edge of what you can get away with, you’ll have no headroom to push the mix in bigger moments when some extra oomph is necessary. As your volume goes up, you lose sonic clarity, and the mix begins to “collapse” – it becomes one big uncomfortable wall of sound. Mixing quieter gives all the instruments a chance to shine and be heard.

There are obviously variables involved here. You may be mixing a small room with a full drum kit; this could require a mix at 95 dB in order to get the mix on top of the drums, and that’s ok! But if you’re mixing a larger room where you only need 85 dB to balance nicely with the drums, consider starting there.

Stage volume is typically the biggest factor in how loud your mix needs to be. There are some great options for reducing stage volume. You can move guitar amps off stage into an isolated room or box, or you can use amp or cab simulators to send your guitars directly to the console, rather than micing your amp.

Drums can be a bit trickier. We’ve mentioned in a previous blog post that drum shields are largely ineffective for reducing the volume. Short of a fully enclosed drum booth, your best bet is to rely on your drummers to learn to play quieter if necessary. The best drummers can play to any size room while maintaining almost all the feel and energy needed for the songs.

The decades old fight over volume in church isn’t going away anytime soon. You can’t please everyone, but you can be confident in the decisions you’re making, and when you have a clear understanding of what you’re doing and why, you’ll be in a much better position to bring people along with you. 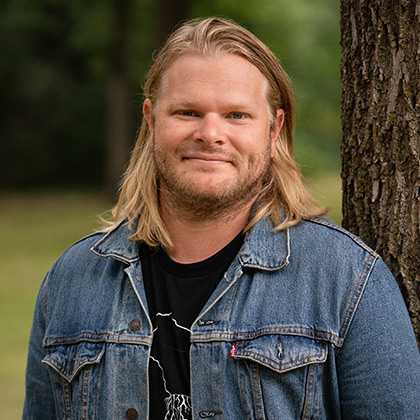 Josh Tarp is a multi-instrumentalist, singer-songwriter, and worship leader from Minneapolis with over 15 years of experience in church & worship leadership. Josh serves as the Director of Marketing at Motion Worship, helping to write various blog posts, managing social media, designing graphics, and handling customer service.